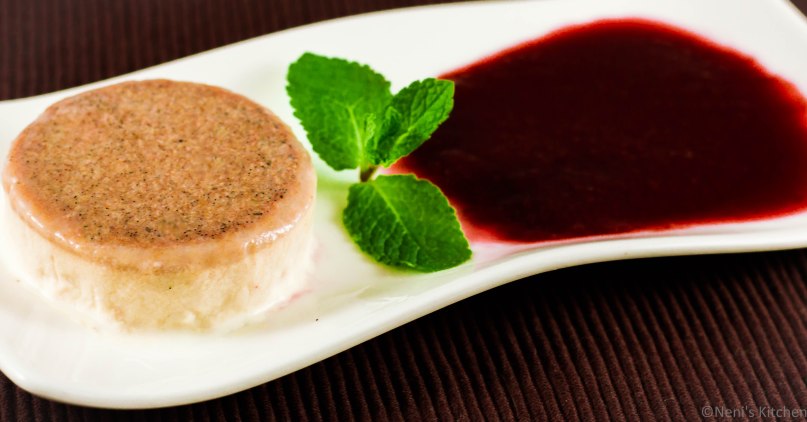 It’s been a while since I posted the last recipe, but as for most people, the time before Christmas is quite busy.
I made this panna cotta last time we had some guests over and since everybody loved it I decided to put it on the blog as well. It’s a perfect dessert for winter and the holiday season, because it incorporates all these great winter flavors. The panna cotta it quite light, because I replaced about 1/3 of the cream with milk, which is a lovely contrast to the boldness of the cherry & red wine glaze.
Since I like lush flavors I used a lot of red wine, but if you prefer the glaze to be a bit lighter or for the cherry to come out a bit more, just reduce the amount of red wine by 1/4 to 1/2.
Before making panna cotta for the first time I though it was quite a difficulat and time-consuming to make, but it is quite easy. Try it and let me know what you think!

2. Once the cream is warm, put one laddle of the mixture into a small bowl, add ground cinnamon and vanilla seeds and mix until there are no clots left. (If you were thinking about skipping this step, don’t! I did the first time I made panna cotta and you’ll end up with lots of cinnamon clots etc. which don’t dissolve). Add the cinnamon & vanilla cream back to the rest of the pana cotta mix.

3. Bring to boil and let simmer for about 10 minutes or until it has reuced by about 1/3. Take off the heat.

4. Squeeze out the gelatine leaves and discard the soaking water. Stir the gelatine into the cream and milk mix until it has dissolved. Allow to cool off, stirring occasionally.

6. Pour into little cups or molds, cover and chill for a few hours until the panna cotta has set.

7. In the meantime, prepare the cherry & red wine glaze: Bring cherry compote and juice to boil with cinnamon, juice and zest of 1/2 lemon, cloves, anise seeds and sugar. Let simmer for 10 minutes until is has reduced.

8. Add the red wine and leave to cook in a bit more.

9. Remove cinnamon stick, lemon zest, cloves and anise seeds. Purée with a hand blender until smooth. If the sauce is still too liquid, cook in a bit longer until you are happy with the consistency. Leave to cool off.

10. Once the panna cotta is ready, serve with the red wine & cherry glaze, lean back and enjoy!